So after my long absence in actually writing something, here we go with the first part on Solar Radiation as a GIS tool to use in decision making as a viticulturist.

First off, you need to understand the term “Solar Radiation”. A common misconception is that it is temperature – which it is not. You can argue that it will correlate with a trend in temperature, in which I will reply “yes you can make that assumption”.

So, without me having to think of an easy way to explain this, here is how it is explained on the ESRI site, with a few words changed: Incoming solar radiation (insolation) received from the sun is the primary energy source that drives many of the earth’s physical and biological processes. Understanding its importance to landscape scales is key to understanding a broad range of natural processes and human activities.

With landscape scales, topography is a major factor that determines the spatial variability of insolation. Variation in elevation, orientation (slope and aspect), and shadows cast by topographic features all affect the amount of insolation received at different locations. This variability also changes with time of day and time of year and in turn contributes to variability of microclimate including factors such as air and soil temperature regimes, evapotranspiration, snow melt patterns, soil moisture, and light available for photosynthesis.

Solar radiation enables you to map and analyse the effects of the sun over a geographic area for specific time periods. It accounts for atmospheric effects, site latitude and elevation, steepness (slope) and compass direction (aspect), daily and seasonal shifts of the sun angle, and effects of shadows cast by surrounding topography. (find the whole explanation here: Area Solar Radiation)

So, by making use of Solar Radiation you don’t only take into account slope, or aspect, or elevation, but all of the factors involved.

I will show you how this affects your decision making in planting specific varieties, with the aim of making certain wine styles.  This will demonstrate that “South” is not necessarily “South” in the sense that we perceive it… 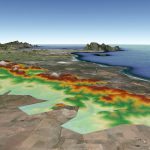