It was around 14:00 on Monday the 25th of September that I received a phone call from farmer and wine enthusiast André du Toit, the same guy that enjoys and embraces my energetic (and mostly crazy) ideas to farm and develop on his farm, evident with our new project for the vine garden of Grenache, Carignan and Cinsaut, plotted and designed with my drone, in the rugged granite soils of the Paardeberg.

The reason for the phone call was the following: He saw vineyards budding in a field on his farm. André has only recently purchased the farm. He asked me if I can come and have a look at the vineyard, and see if it is worth reviving. André understands the value of old vineyards and he also understands the difficulty with getting the economics right.

So Tuesday afternoon I headed to the farm, situated on the foot slopes of the Paardeberg, in the Voor-Perdeberg area. What I found was, well, a field with lupines, and some vines barely clinging to life. With further assessment I told André I think it is worth a shot. A quick phone call to someone with similar and even crazier ideas than me, and the block was sold. The lifeline has been thrown. Who else – Pieter Walser of BlankBottle.

So while André and his team where getting the lupines and weeds under control, I did some detective work. With the help of the guys and gals at SAWIS, we managed to track the block. The original block was planted in 1974 – one year after André was born! It was 13.5 hectares big. No record of rootstock. No record of clones. What we do know is it is Chenin blanc, and it is old vines! Once the block was cleared a bit of all the weeds, we saw some rootstocks growing wildly – seems like the vineyards where originally grafted on Jacquez, but most are covered with soil by now and grows on own roots. The block is now less than a hectare.

We are currently gently pruning the vines – NEVER prune an old vine, especially a neglected vine, back or hard. You just want to stimulate growth and sunlight penetration. This is not a vegetable, this is going to take a few years. But for those willing to wait, the reward is great. We are using only four very skilled ladies to tend to these vines for this year.

We will keep an open diary with this block, and hopefully these vines will once again be given the chance to produce something magnificent (no pressure Pieter…) 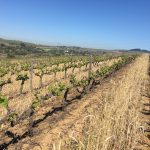 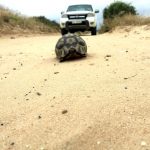