Skimming through an article in the September issue of the Australian Wine Business Magazine, I came about an article written by Dr Mark Greenspan about the poor fruit set in the Coastal regions of California. A very relevant article, seeing that we are entering fruit set now.

His conclusion for the poor fruit set aims at lower temperatures. As we all know, cold weather during flowering (and heavy winds in the case of Malbec and Petit Verdot) hardly ever results in good, even fruit set.

Looking at our critical months for flowering and fruit set (September, October and the start of November) we see a completely different story.

I will be looking at only one region – Perdeberg. (approx. 45 000 tonnes of grapes produced in this sub-region)

Looking at the varieties that flowered early and subsequently started to set earlier, things look very promising. The early Chardonnays look to have set very well – even on the Guyot systems. A lot of early Pinotage and Chenin blancs have also set very nicely.

Despite the dry growing season in 2014/2015, a not-so-wet winter and a bone dry summer, the vineyards still look very good, with a decent crop on the vines. It is a bit early to call a good overall fruit set year, with a lot of Cabernet Sauvignon, Sauvignon blanc, Ruby Cabernet, Merlot and some late Chardonnays  still at about 75% flowering, but the way the weather looks for the next two weeks I think we are set… 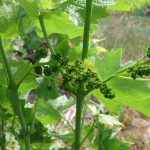 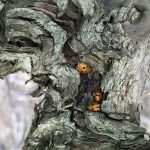